Judgment Begins At The House Of God

For the time has come for judgment to begin at the house of God; and if it begins with us first, what will be the end of those who do not obey the gospel of God? (I Peter 4:17)

BEING A FINANCIAL INSTITUTION

Twice during Jesus’ ministry on this earth, once at the beginning and once at the end, He cleared the Temple physically of the money changers: 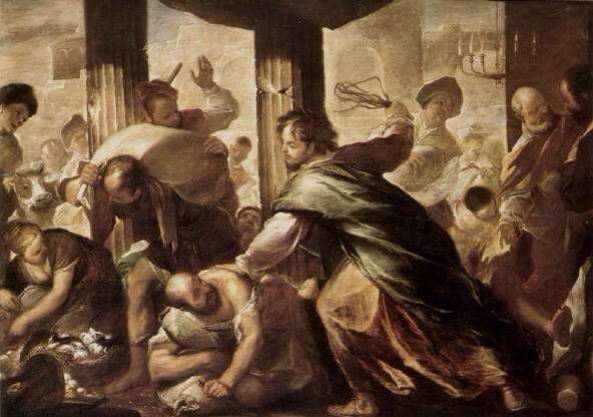 Don’t get me wrong. Money and finances were a very important part of the early Church and still is today for the Church to operate. But money and finances must be kept in the proper perspective. The only way I can demonstrate this is by looking at two different types of ministries.

The second ministry that was not as fortunate, which will remain nameless, was one that my family and I had to flee from because of what it evolved into over the course of the twenty years that we attended. This kind of Church becomes very dangerous because you will see fruits of the ministry, but deep down they have left their first love just like the Church of Ephesus:

Let me explain why it becomes very dangerous. You will readily see the fruits of their labor. Wonderful music and singers. Fabulous Easter and Christmas productions. State-of-the-art gymnasium and fitness center as an outreach to the community. Huge worship center and grounds. Highly visible K-12 School and athletic programs. Dynamic short term missions trips to third world countries. Great rapport with local authorities and media.

But, because finances are priority and the Gospel takes backseat, I want to share what you do not readily see. You do not see the shipwrecked Christians that are left in the wake. This kind of Church needs lots of money to finance all of what you do see. Because it has become more of a man made institution, leadership cannot rely on the Holy Spirit to convict individuals to joyously contribute to the monster that has been created. So they become financial institutions where leadership is occupied with financial investments rather than devoting themselves to the Word of God and tending to the sheep. They only want to shear the sheep for their wool rather than putting ointment onto their wounds. Their sheep are never truly at peace and can never experience the 23rd Psalm because they never know when their contributions and efforts are enough. They are always left thinking they could of given more. Another thing you will not usually see is individual home study groups. The reason for this is the Church cannot have complete control of groups like this.

I have found that Churches like this do not disclose their financial records for the average tithe payer to view. Everything is kept under lock and key. They cover up any financial shenanigans. There are civil lawsuits on record that involve financial misdealings. They promote books like ‘Under Cover’ by John Bevere that puts a new twist on the ‘shepherding movement’ where the sheep are to be in complete subjection to their leadership and never ever question anything. They keep power within key families. Everyone of prominence  is a cookie cutout of the head. They can only talk of past movements of the Holy Spirit because the Holy Spirit has been stifled for any future movements. You will only hear “Look what we have done!” Sermons are carefully crafted to fit in with their agenda. Skits are designed and presented to stifle any grumblings and wake the worker bees up by reminding them ‘Do it for Jesus!’ New member classes explain how the Church they are joining has been chosen by God to be different from the rest of the Churches, even within their denomination. They are proud that their senior pastor has a financial degree and his motto is: “I would rather make dust than eat dust.” You will never ever hear their leadership apologize in front of the congregation when an apology is in order. They believe this would place doubt in the congregation’s minds that their leadership is not always correct and does not always have a direct pipeline to God.

Because of the way Churches like this evolve and operate, it is hard to put your finger on. You may see a person make a commitment to Jesus Christ at one of their events, but when you compare this kind of Church to Scripture, things just don’t add up. If you try to talk to another member who is under the spell about this, they will look at you as if you are of the devil. But one thing for sure, if you are fortunate enough to not be shipwrecked and are able to step into a Church where the Gospel is priority, where finances are transparent, and the ministers attend to the wounds of the sheep, it will hit you with a breath of fresh air and bring a peace and joy to your soul like you once knew when you were saved. My family and I were fortunate enough to experience this.

I believe that the devil attacks both individual Christians and the Church through sexual sins more than any other means. Look what he did to both Samson and David in the Old Testament. In the New Testament, he tried to bring the Corinthian Church down by it. In the modern day Church, because society has adopted such a carefree attitude toward sex and pornography, it has spread into the Church and greatly weakened it. No other sin affects us like sexual sin:

Many Churches adopt a ‘don’t ask-don’t tell’ type of mentality. They love to preach against righteous judgment and label any quest to purge the unrighteousness as gossip. Other Churches go to the extent of thinking nothing of people living together without being married or of extra-marital affairs. Still others go to the extreme of accepting homosexuals.

Let me make it clear, all sinners are invited to attend Church services and to hear the gospel of Jesus Christ. We are to invite all sinners with open arms and no bias as long as they are peaceable. Not until they repent and turn from their sin, can they become members and hold positions. But this is not what the Gay community wants. They want total acceptance without repentance.

I believe the following verse is greatly misused from the Bible:

The misuse comes when the following verse is not used in conjunction with the above verse in order to rightly divide the Word of God:

You cannot hide a multitude of sins without repentance first taking place. When a Church and its leadership turn their heads in the other direction when sexual sins are present because tithes or talents are involved in the equation, the whole Church will suffer because even though they turn their heads, God will not.

Let me elaborate. I have seen it where a person is a significant tithe payer or a key member of a ministry or even part of a large family in a Church, where leadership will resort to ‘the end justifies the means’ mentality. They are more afraid of the fallout from disciplining a member than they are of the Lord’s command:

Let’s face it, the Church in America, in Europe, and in many other parts of the world is anemic. It is not only anemic, in many cases it is absolutely pathetic. Look what Jesus questioned:

Don’t get me wrong. I believe that all Christians need to be members of a Church. I am a member of a local Church myself. It is mandated by the Lord in His Word. But it has become difficult to find a Church that adheres and operates according to the Word of God. In some cases, whole denominations have gone by the wayside.

This is why I believe and pray for one last Holy Spirit revival. If there is, my question is will it be on the highways and byways rather than just the confines of Church buildings? Remember when Ahab and Jezebel abandoned the worship of the true God at the Temple, look what happened:

My question for you is: “Have you allowed the Lord to reserve you or have you bowed down and kissed Baal?”

Defender of the Christian Faith
View all posts by annointing →
This entry was posted in Warnings and tagged 1 Peter 4:17, Acceptance Without Repentance, Church Is Not To Be A Financial Institution, Judgment Begins At The House Of God. Bookmark the permalink.