Dominionism Is Not The Way

It seems everyone is talking about what is wrong with our culture and what we should do to fix it. It is now at the forefront of the news concerning the run for the next president of the United States. The candidate that this has been especially true with is Ted Cruz. This is because of his father, Rafael Cruz, who is an outspoken Christian preacher and public speaker. He is described by various media outlets, including the Wall Street Journal, as an acting surrogate in his son’s political campaigns. Earlier this year, Rafael Cruz spoke at televangelist Kenneth Copeland’s church in Texas, where the controversial prosperity gospel preacher declared that Ted Cruz has been anointed by God to be the next president. Copeland introduced the elder Cruz by asserting that “I believe, with all my heart, that his son is called and anointed to be the next president of the United States.”

“Among My people are wicked men who lie in wait for victims like a hunter hiding in a blind. They continually set traps to catch people. Like a cage filled with birds, their homes are filled with evil plots. And now they are great and rich. They are fat and sleek, and there is no limit to their wicked deeds. They refuse to provide justice to orphans and deny the rights of the poor. Should I not punish them for this?” says the Lord . “Should I not avenge Myself against such a nation? A horrible and shocking thing has happened in this land— the prophets give false prophecies, and the priests rule with an iron hand. Worse yet, My people like it that way! But what will you do when the end comes?” (Jeremiah 5:26-31)

Rafael Cruz is an extreme advocate of Christian Dominionism and is very aggressive towards anyone who does not hold his views, even with other Christians. This is why we as Christians need to have an understanding of what Dominionism is, because on the surface, Dominionism seems very noble, but underneath it is a much different story. 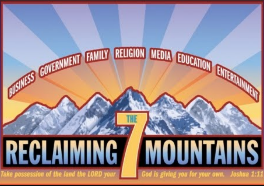 Let’s start off by seeing what gotquestions.com has to say about Dominionism and the ever so closely related New Apostolic Reformation and Word of Faith Movement:

This is what renowned Bible expositor, Dr. John Phillips (1927– 2010), has to say:
“Paul, just before his martyrdom, warned Timothy to steer clear of entanglements. He was not expected to organize marches and demonstrations to mobilize public opinion against slavery, persecution and other social ills. God’s purposes in this world in this age are spiritual rather than social. If enough people are saved from their sins, social reforms will follow as a matter of course. God has worked this way in history for the last two thousand years. Think, for instance, of the deplorable social conditions in England in the eighteenth century. Corruption and crime in high places went hand in hand with vice and violence at all other levels of society. The church was materialistic and spiritually dead. It was the butt of jokes and was devoid of authority and power. A high-handed aristocracy rode roughshod over the rights and ambitions of the common people. Conditions in France were very similar. France exploded in a revolution that produced the guillotine and the Reign of Terror. England, too, was taken by storm, not by revolution but by revival; the Wesleys and the Methodist awakening led to a widespread cleanup of society. Throughout history, genuine spiritual awakenings have resulted in social change.”

The following three PDF’s shed a light on the roots of our modern Dominionism and why we as true followers of Jesus Christ are not to get caught up with it or be distracted by it:

Rise Of The Christian Right.PDF

7 Reasons For Not Being A Dominionist.PDF

Acts 9:2 refers to the early Christians as the ‘Way’ and Acts 17:6 tells us that they ‘turned the world upside down’. They did not do it politically or socially. They did it spiritually by bringing people into a life changing spiritual relationship with Jesus Christ. Keep in mind that most of the time it was one person at a time. Emperor Constantine tried to do it politically and socially and it turned out disastrous. Not until almost 1200 years later did things begin to turn around with the Protestant Reformation.

I am asked, “Why do I investigate and report the truth about certain ministries?” I will tell you. First, it is simply because I am commanded to do so (Ephesians 5:11). Second, it is because the people in local churches are no longer satisfied with studying the rightly divided Word of God, having fellowship, serving their communities, and carrying out the great commission. They have itching ears (2 Timothy 4:3). Modern technology feeds them with every twisted and tempting teaching that is out there. And it is making many of these ministers that twist the Bible to fit their agendas into multimillionaires. They project a false caste system of those that follow them as if they are in some way superior to what other Christians are. Their followers are willing to financially fuel these demigods who teach heresy because they feel privilaged to be associated with their ministries and to be privy to their newly unlocked Biblical secrets. Take Kenneth Copeland for instance. He is a main proponent of Word of Faith/Dominionism/New Apostolic Reform and he brags that he is a billionaire, whether he is by now or not. The first PDF below illuminates his heresies and the second points out the fact it is the heretic who is the violator, and not the one bringing to light the heresies:

As a simple illustration, false teachers like Kenneth Copeland like to take the following verse and twist it to say that the Dominionist’s must restore all things before Jesus returns. Whereas rightly dividing the Word of God teaches us that the world in the end times will be in such bad shape and groaning, that only Jesus will be able to restore everything upon His return:

For He must remain in heaven until the time for the final restoration of all things, as God promised long ago through his holy prophets. (Acts 3:21)

This earth is not our home. We are strangers in a foreign land. The earth and mankind groan for the second coming of Jesus Christ:

Yet what we suffer now is nothing compared to the glory He will reveal to us later. For all creation is waiting eagerly for that future day when God will reveal who His children really are. Against its will, all creation was subjected to God’s curse. But with eager hope, the creation looks forward to the day when it will join God’s children in glorious freedom from death and decay. For we know that all creation has been groaning as in the pains of childbirth right up to the present time. And we believers also groan, even though we have the Holy Spirit within us as a foretaste of future glory, for we long for our bodies to be released from sin and suffering. We, too, wait with eager hope for the day when God will give us our full rights as His adopted children, including the new bodies He has promised us. We were given this hope when we were saved. (Romans 8:18-24)

Since everything around us is going to be destroyed like this, what holy and godly lives you should live, looking forward to the day of God and hurrying it along. On that day, he will set the heavens on fire, and the elements will melt away in the flames. But we are looking forward to the new heavens and new earth He has promised, a world filled with God’s righteousness. (2 Peter 3:11-13)

I will leave you with this question. Who do you think the following verses refer to? Is it the obvious deceivers? Or is it really the carefully crafted ministers going around doing so-called dynamic acts of faith and in so doing have huge followings?

Not every one that saith unto me, Lord, Lord, shall enter into the kingdom of heaven; but he that doeth the will of my Father which is in heaven. Many will say to me in that day, Lord, Lord, have we not prophesied in thy name? and in thy name have cast out devils? and in thy name done many wonderful works? And then will I profess unto them, I never knew you: depart from me, ye that work iniquity. (Matthew 7:22-23)